Brand new is the TWP Semi-Solid Pro-Series Stain! As always, we appreciate your input, so feel free to leave a comment below and pictures of your completed projects if you have them. 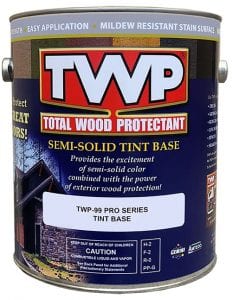 Available in 30 Custom Colors, the TWP® Semi-Solid Pro-Series will keep your wood beautiful, fresh, and looking new longer! The ease of application and maintenance will allow you to enjoy your investment for years to come. 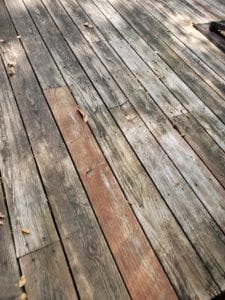 Before Prepping for TWP Semi-Solid Stain

– We prepped the deck first with the Restore-A-Deck Stripper and Brightener kit and applied the TWP Semi-Solid in the Cedar Mulch color after a few days of drying. The overall appearance was excellent with very even coverage. Semi-solid in appearance with a small amount of wood grain showing. The TWP Cedar Mulch color penetrated deep into the wood grain on our pressure treated deck. This will result in little to no wearing and peeling down the road. We would expect this stain to last 2-4 years before a reapplication is needed.

– This is a brand new stain from TWP. The base of this stain is the TWP 100 Pro-Series and which has consistently scored an 8 out of 10 at the 2-year mark. We expect even better UV protection due to the higher solid content of the semi-solid. We will update as needed. 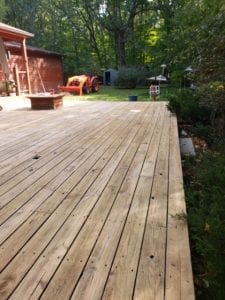 After Prepping for TWP Semi-Solid Stain

– The price paid was $250 for the 5-gallon pail of TWP Semi-Solid Pro-Series with Free Shipping. The coverage rate is excellent for the TWP Semi-Solid and we used less than 4 gallons for our 800 sq. foot deck. The total amount for the stain on our deck came to $200 or .25 cents per square foot.

All Help Articles and Product Reviews Have Been Updated for 2022! Please post a review in the Consumer Star Ratings below each Article.The Comment Area Below the Articles are for in-depth reviews and any questions you may have on each topic. You may post pictures here as well. Top Deck Staining Articles 2022 Staining A New Deck The Best Deck Stains Become a DSH Contributor? Wood Restoration Contributors

A clear sealer will not provide UV protection from graying.…

Use Restore A Deck Prep kits, much better than EFC-38.…

I am planning to clean and refinish a cedar fence…

1. You do not have to do the support structure…