First, thank you for this website and all the information/questions/forums that you have here - very good resource and wish I had found it 4 years ago.

Background: I applied Benjamin Moore Arborcoat with a sealant to a western red cedar deck and after one winter in northern Canada, it started to peel. After two years, it was peeling much more and grey was showing everywhere + mold in spots. After going through this website, I bought RAD stripper to help and RAD cleaner and brightener afterwards.

I used the stripper and let is sit for 20 minutes then used a pressure washer (2500 psi max, but used a light nozzle, not the highest pressure nozzle). The difference was amazing. I then used the brightener before the wood could dry off (it was cloudy and looking to rain) and let that sit for 10 minutes before rinsing off with a garden hose. It rained overnight and the deck looks 100% better - even if it hasn't dried yet.

There are a couple areas that need a further stripping (noticed this morning). How would I know if there are areas that need sanding versus other work? Should I still sand some of the areas or strip and brighten some of those areas where I still see that old deck stain? Also, it hasn't dried, but I did notice some white marks on there, is that residue from stripper or from the Benjamin Moore clear coat on top? 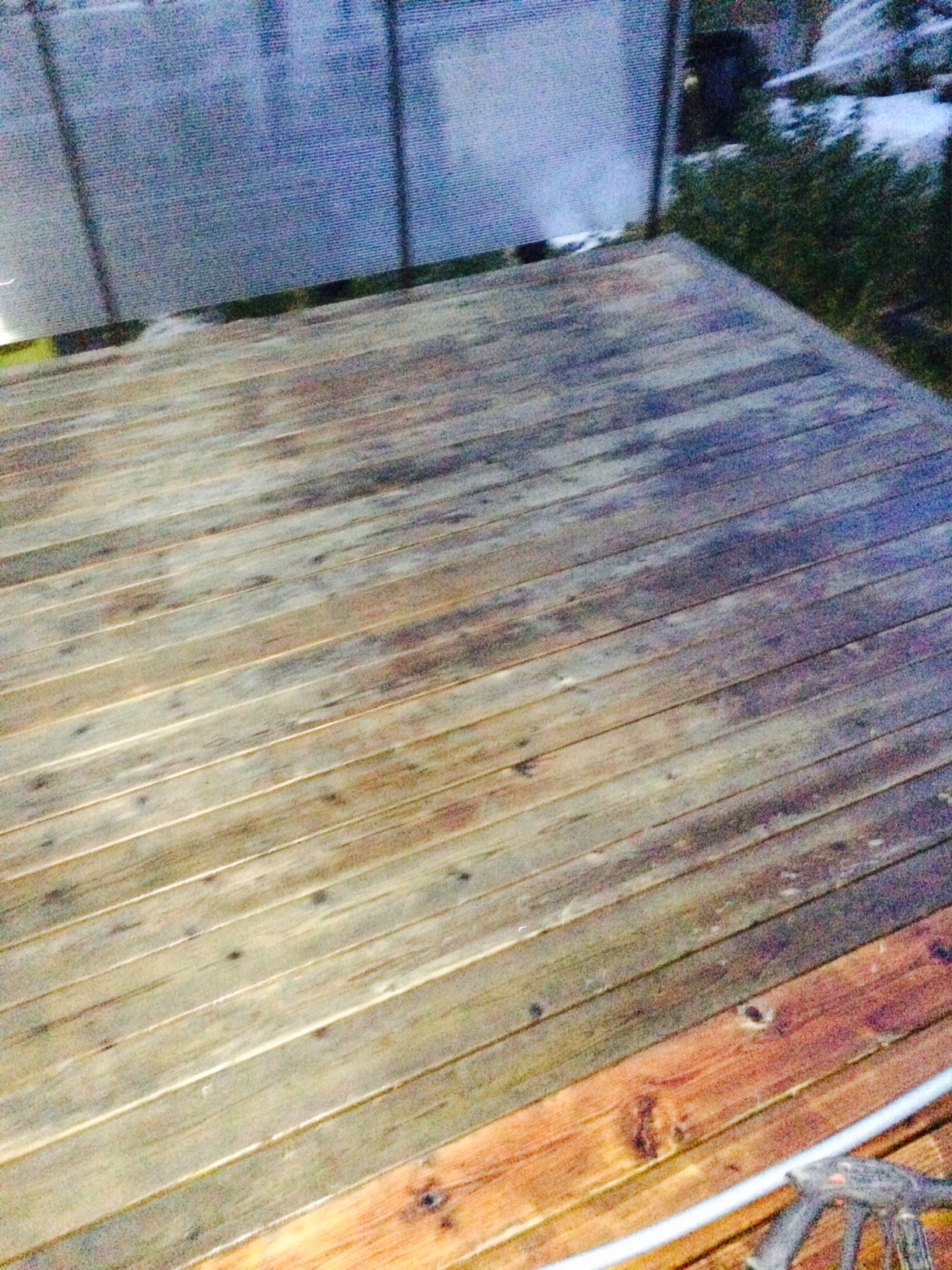 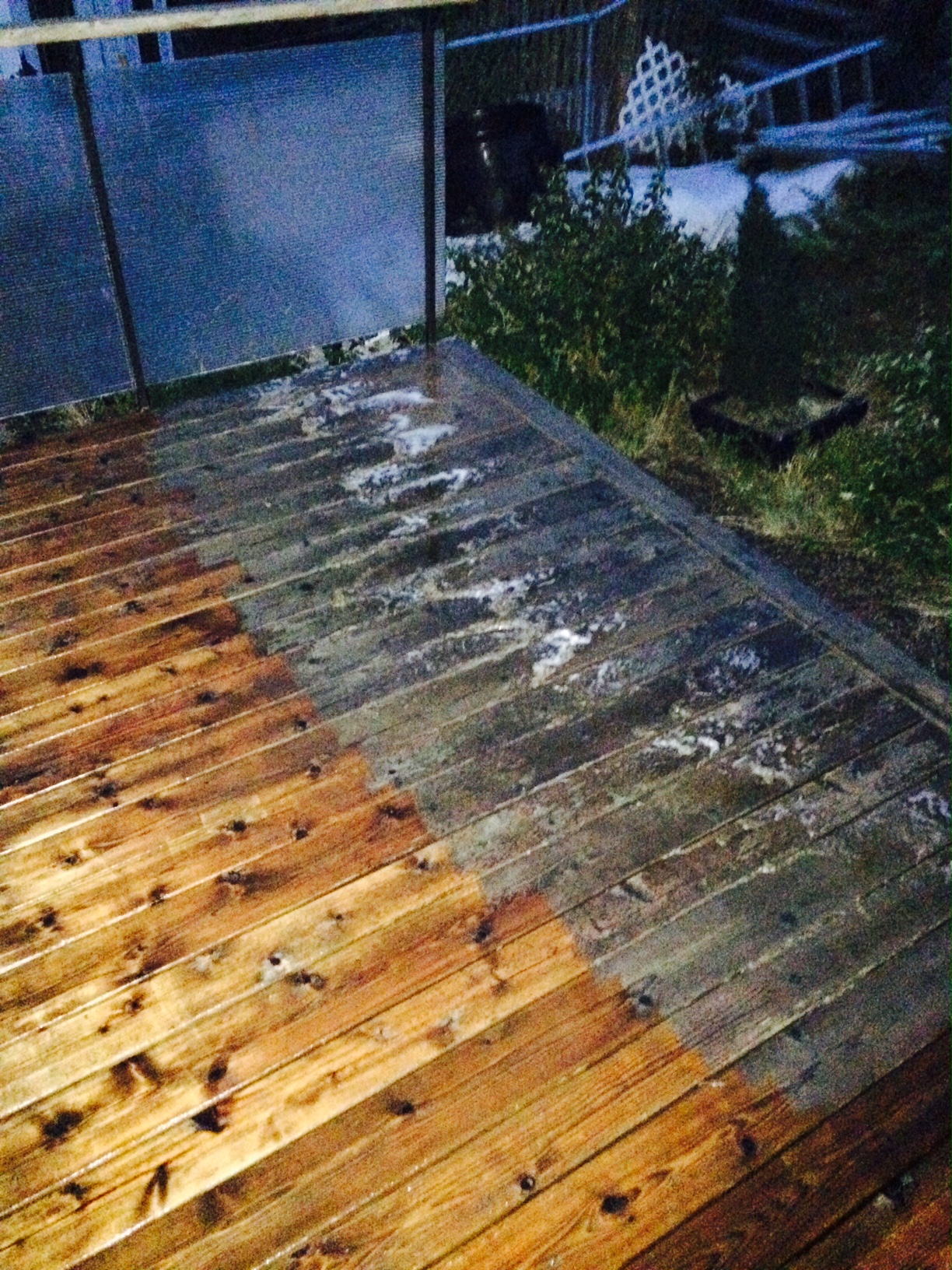 Hard to tell with wet pictures. Strip and brighten the spots again. Sand after only if needed. "White" is most likely old stain but would be easier to tell with a close up of when dry.

I did the stripping and brightening again last night. Two areas where the stain was not fully removed.

I have another picture (some light 'fuzziness' in areas), but can't seem to find the 'reply' in the top tab to include it here. The wood is much lighter (almost back to original colour). Some areas still show light stain colour. I'll sand those areas and any area with that fuzziness & use an air compressor to clear away. After sanding tonight, I'll wait until Saturday to stain.

It is in the blue tab.

Thanks - mental-fart on my side, I think I hit the subscribe side of that tab 3 times...too many late nights prepping the deck!

I've included a few extra pictures. The first one shows one area where the deck stain wasn't removed with two stripping efforts. The second picture shows the furring/fuzzies on the deck.

So I also noticed a few areas with light black (mold dots) that formed under the old Benjamin Moore stain. So I lightly sanded (with a hand-held orbital sander, using 80-grit) those areas with furring, old stain & mold.

The final picture is the deck this morning at 8am (I finished washing off the brightener last night at about 11pm), the deck look so much better, the darker areas still need to dry, I won't apply the new stain (Armstrong Clark, semi-trans cedar) until late Saturday afternoon to ensure the deck is dry.

My only question now is on the mold areas that I noted. I sanded them down, so there was very little black left, but do I need to sand so you cannot see any black at all? 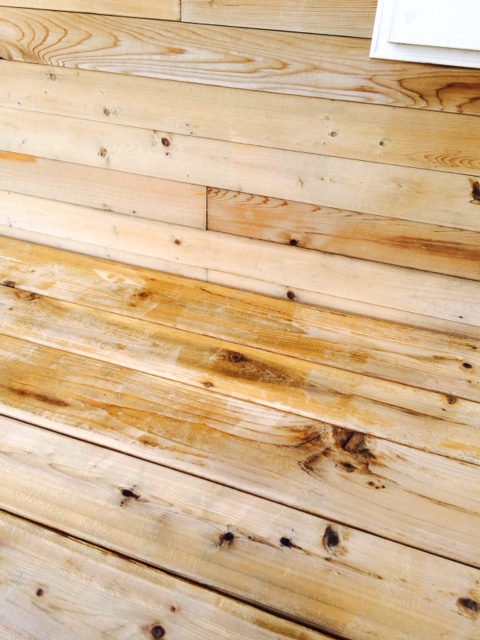 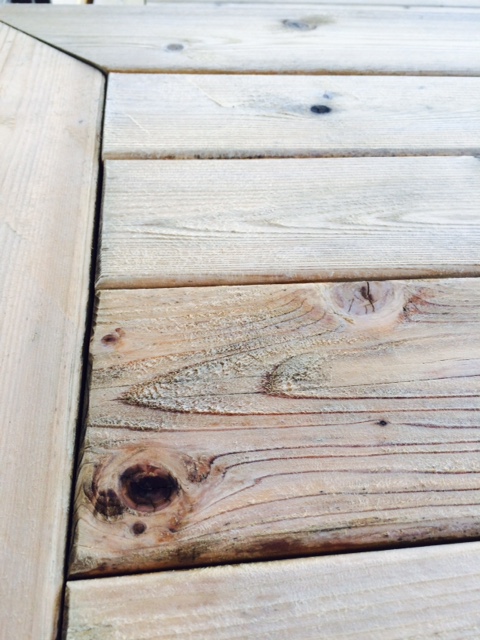 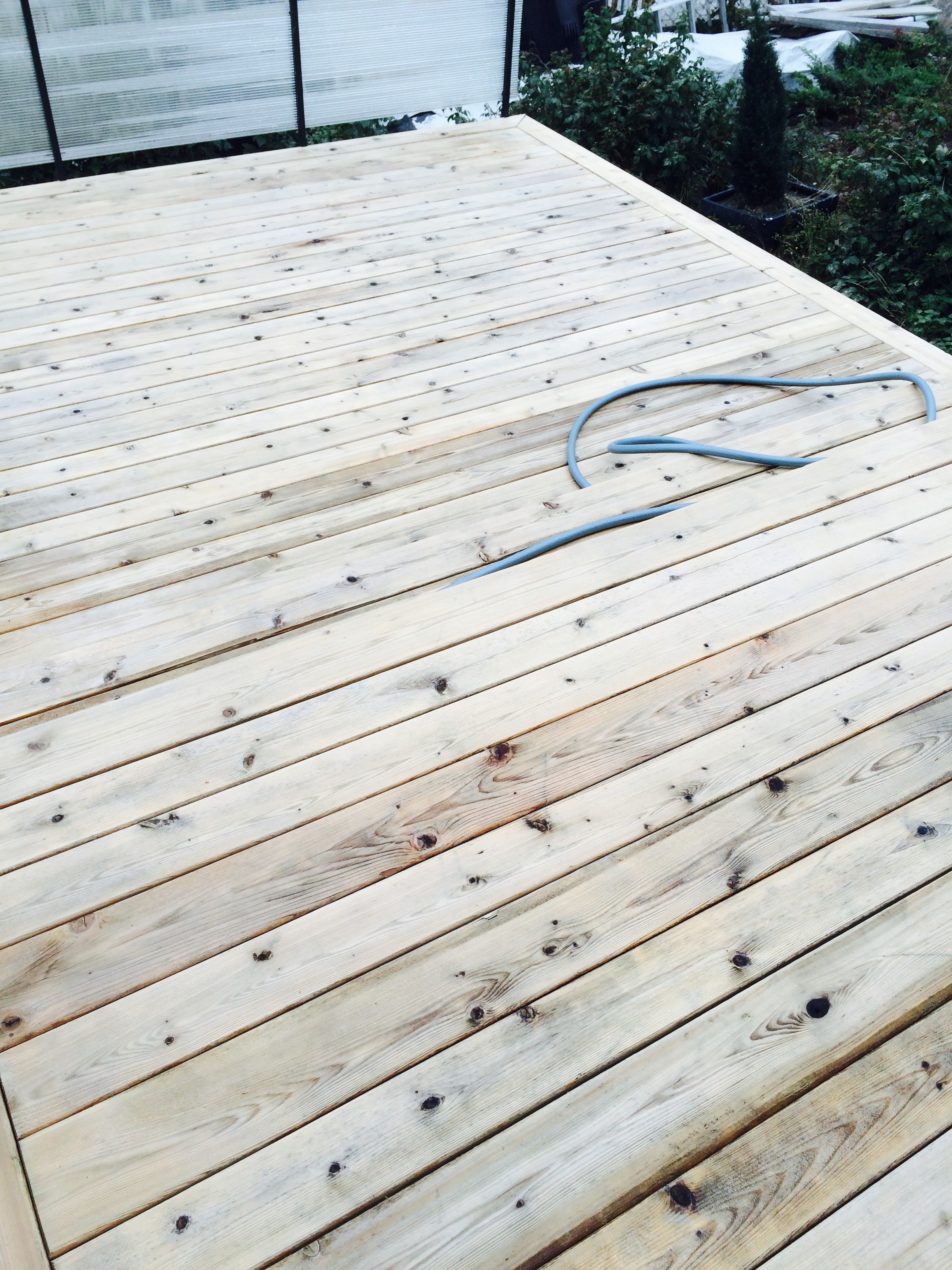 If it is mold and you cannot get it out then you might want to kill it with a light bleach concentration of one part bleach to 5 parts water. Apply to all wood, wait 15 minutes and rinse well.

After this bleach mixture, do I need to brighten right away?

Yes that will help.

Thanks for responding on a weekend. I used the bleach mixture yesterday morning, rinsed and watched it rain. I put on the brightener (hoping your answer would validate it) and then rinsed. I'll be able to stain later this afternoon/night (19 degree - 68F today, deck with sun, 40% humidity). This is what it looks like after all treatments - RAD stuff was great at removing ArbourCoat, was worried I had to sand a lot, but it was fine.

I'll post another picture after stain is on and dry. 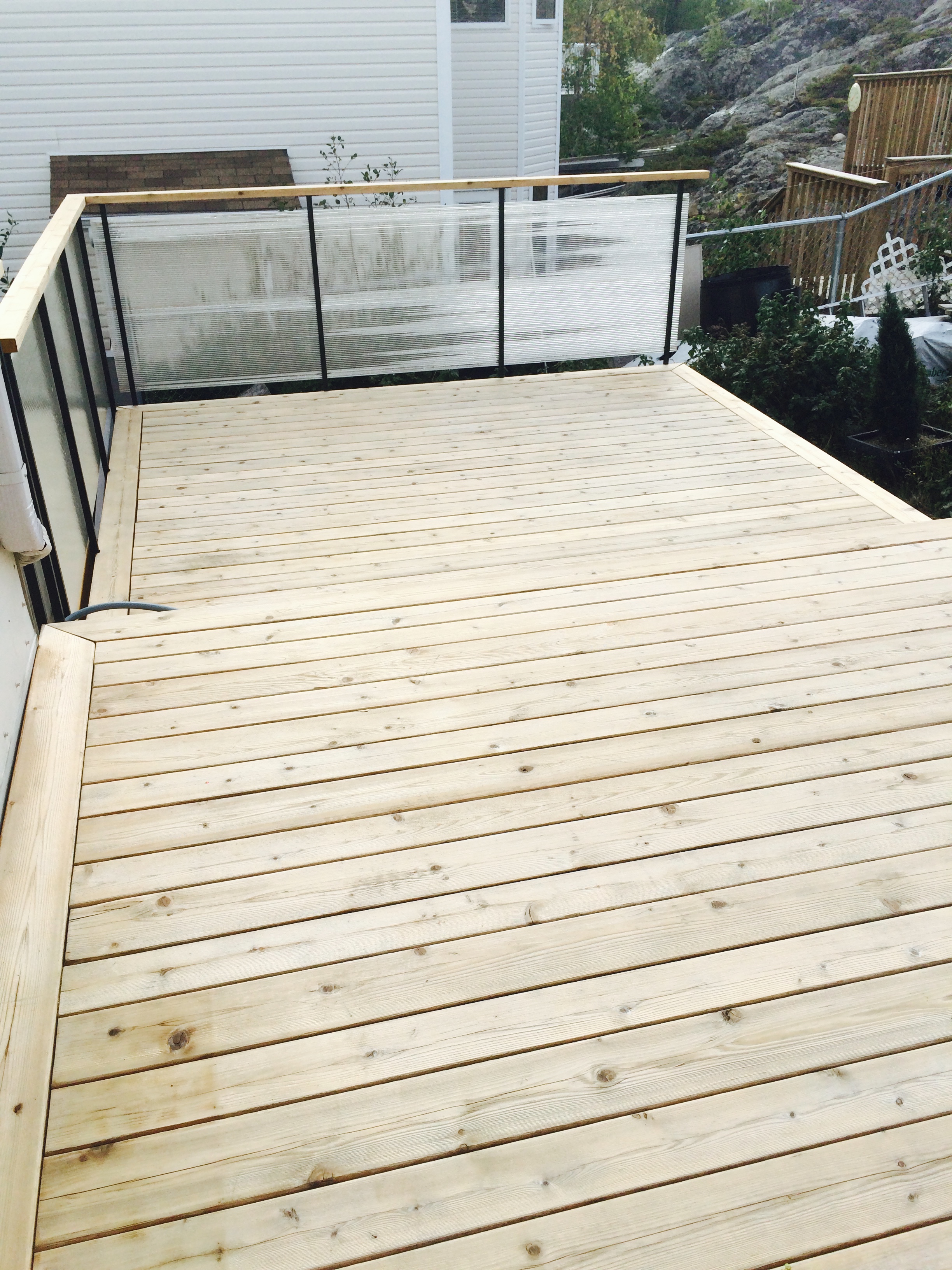 So after all that work, here are some pictures of the final product. I had gotten your advice last year for a stain, so I used Armstrong Clark, Semi-trans in Cedar, both the cedar rails in the front of the house and cedar deck at back took the stain & was dry in 20-30 minutes, so a second light coat was applied as the instructions stated.

I will also give Armstrong Clark some credit, when I phone the company last year, I talked to one of the founders, who was taking calls and answering questions, very impressed.

Of course, the forecast has changed and they are calling for rain over night - the hand-rails will be fine as they were done this morning, the back deck may be different - but we'll see.

Thanks again for all the answers to my many questions... 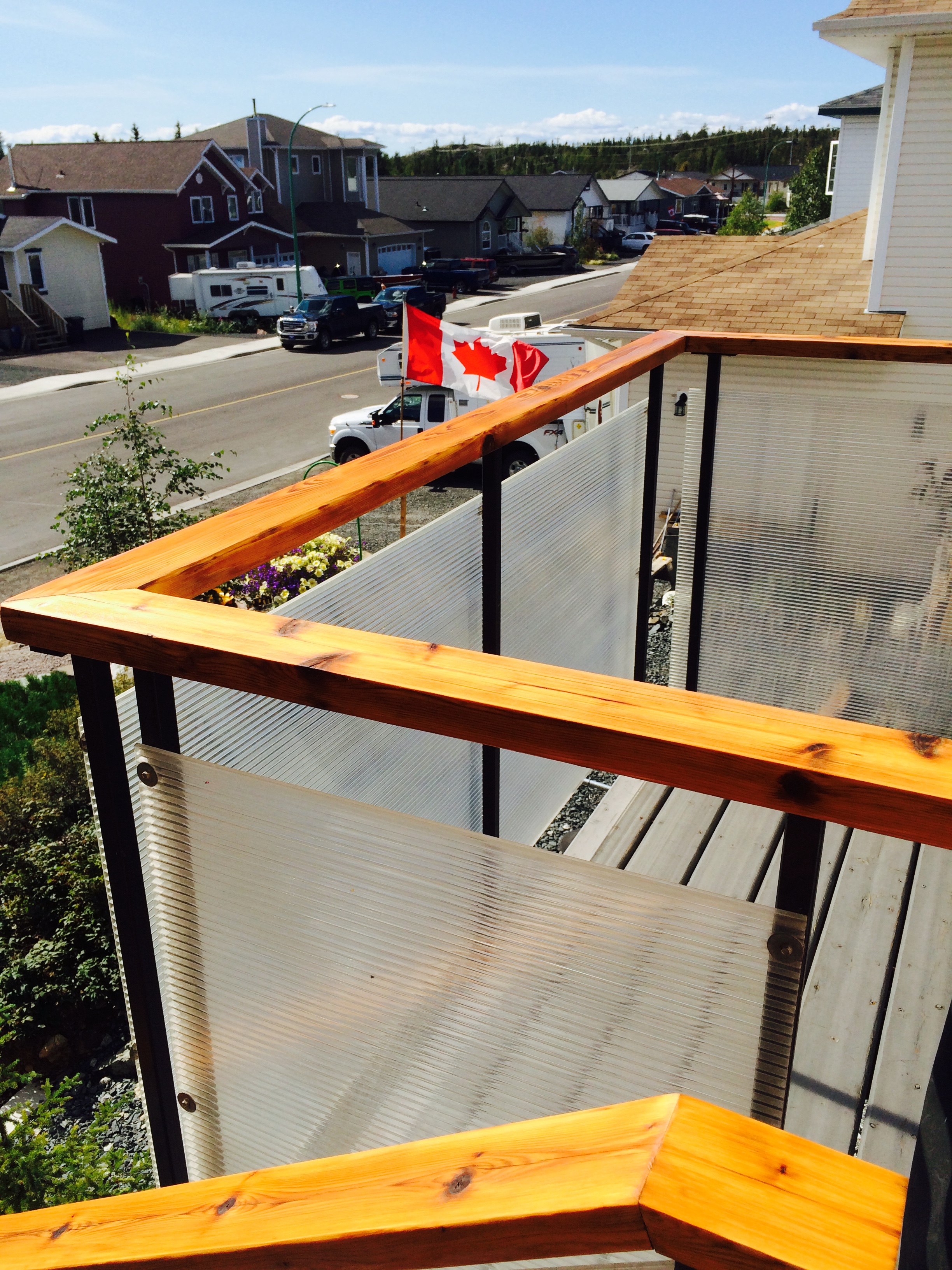 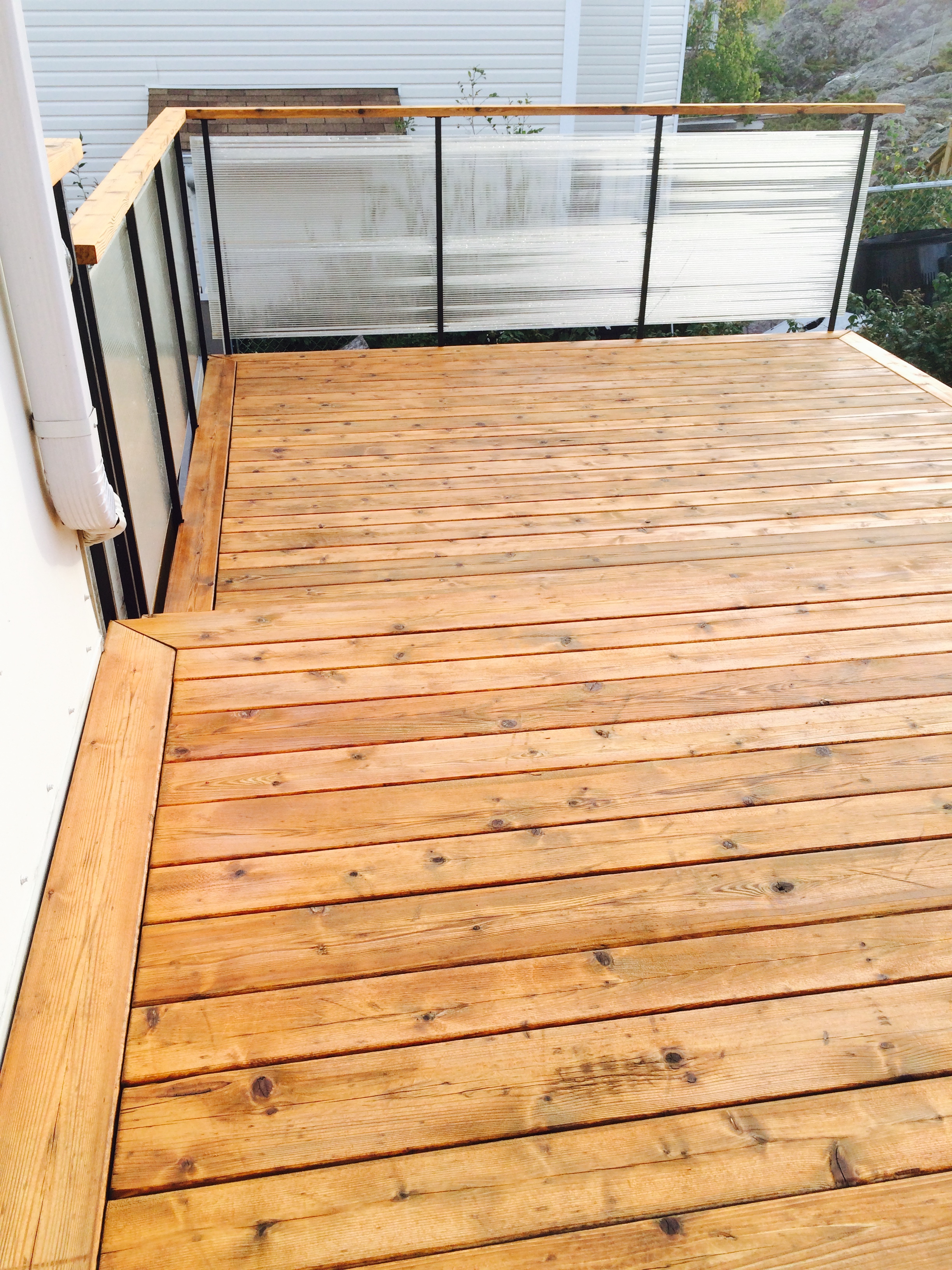 It rained 5 hours after putting the second coat of Armstrong Clarke on the deck, not a drizzle, but a solid rain.

Woke up this morning, the deck looked fine, the water was beading up and no water-marks. I'll see how it looks in a week, as it will be sunny for two days and then rain for another 4...

Looks very good! The rain should not hinder it.

One last picture - it rained shortly (5 hours) after doing the stain (predictions are never good) and the water beaded-up like it didn't belong there. I was very impressed.

Two weeks later and I've put the deck furniture back on, this picture just shows that the water still beads offs the boards.

This is the Armstrong Clark, semi-transparent cedar-tone stain. 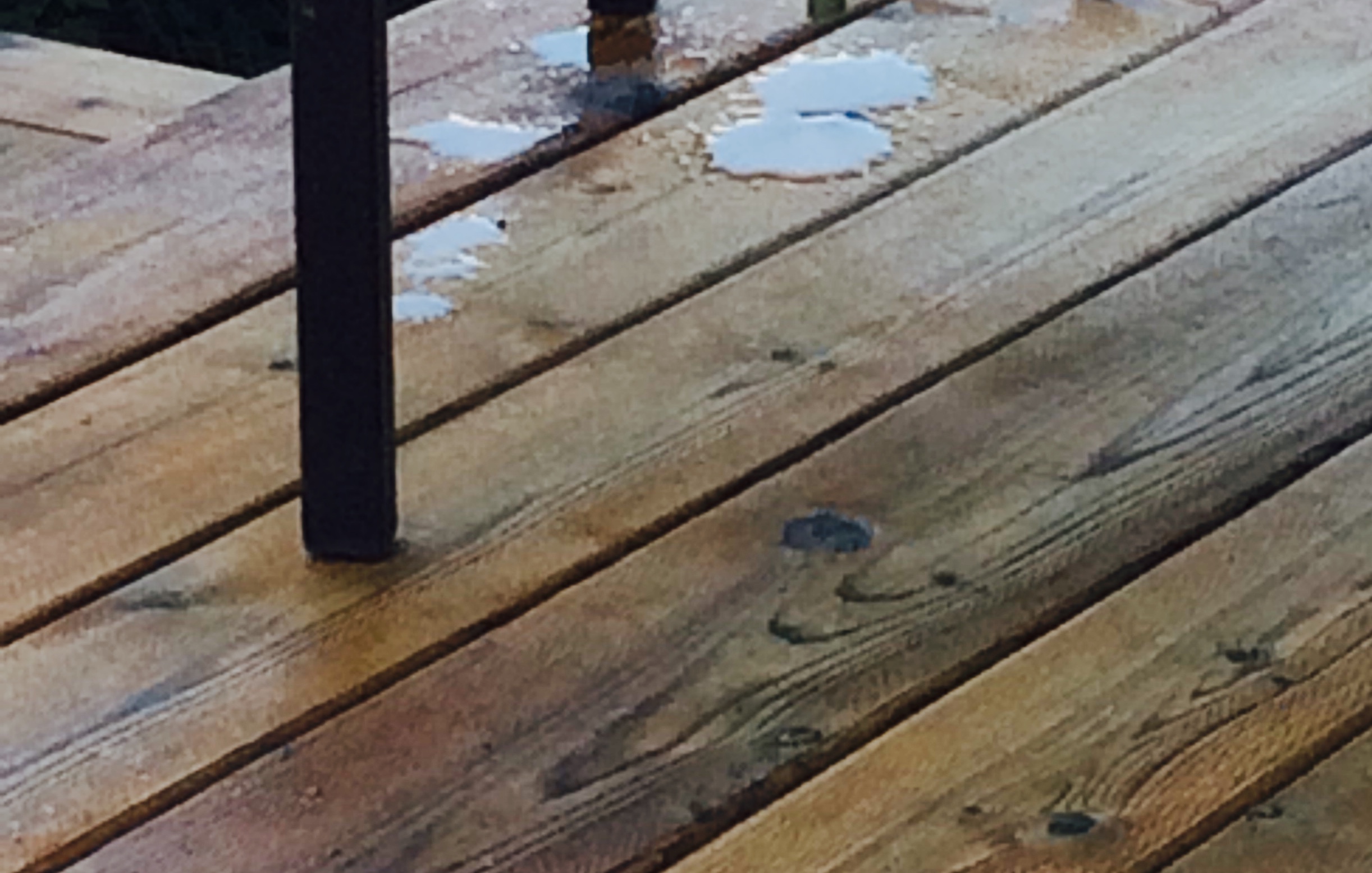 Do I need to pressure wash before using the RAD? I'm removing some old TWP 100? Thanks.

All Help Articles and Product Reviews Have Been Updated for 2021! Please post a review in the Consumer Star Ratings below each Article.The Comment Area Below the Articles are for in-depth reviews and any questions you may have on each topic. You may post pictures here as well. Top Deck Staining Articles 2021 Staining A New Deck The Best Deck Stains Become a DSH Contributor? Wood Restoration Contributors

Moisture Content of Deck When…
6 hours ago by Deck Stain Help
Yes.

Moisture Content of Deck When…
7 hours ago by Rick Puncochar
Thanks–can I apply the alkyd/acrylic with a night time temp ...

Moisture Content of Deck When…
7 hours ago by Deck Stain Help
You should be fine to stain.

Moisture Content of Deck When…
11 hours ago by Rick Puncochar
I pressure washed my 13 year old pressure treated southern ...

When to use a Solid…
3 days ago by Deck Stain Help
Flood makes a decent solid stain.