Note: There has been a ruling on the Class Action Lawsuit as of March 6th, 2017:

Even though they have settled this lawsuit, Rust-Oleum Deck Restore is still sold to unsuspecting consumers and has not been pulled from the shelves.

Rust-Oleum Deck Restore is a water-based, low odor product that is designed to mask the wood not allowing the wood grain to show. It is marketed as a thick paint product for wood decks that is outside of conventional restoration.

Recently there have been investigating claims on behalf of customers who have used Rustoleum Deck Restore on their decks. Rustoleum Restore has been alleged of being prone to premature failure. When it is applied to exterior wood it may be susceptible to bubbling and/or peeling, which can lead to costly repairs and replacements.

Lawsuit Against Olympic Rescue It

Here at DeckStainHelp.com we take pride in the fact that we have become the Internet’s go-to source for keeping up to date on the latest in deck staining news. Be sure to do research about the brands of stains you choose to use for your deck stain projects to avoid catastrophes. If you have ever used Olympic Rescue It, feel free to leave a comment below. 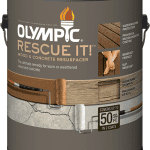 Olympic Rescue It may fit the term “it’s too good to be true.” This Olympic paint and stain hybrid product is marketed as a resurface DIY product. It claims to be the ultimate remedy for severely weathered or damaged wood surfaces. Olympic claims that Rescue It is a resurfacer and sealant all in one for wood decks that are damaged beyond conventional restoration services. They also market it to be used on concrete surfaces as well.

This hybrid sealant is supposed to fill cracks and hold down splinters to deliver a slip-resistant textured finish that is supposedly barefoot friendly, shown by the picture of bare feet on the front label. It is a 100% acrylic waterproof protectant that Olympic calls a “high-performance coating” offering outstanding elasticity. But recent customer claims and lawsuits say differently.

We Would Love to Hear From You! Please post a review in the Consumer Star Ratings below each Article.The Comment Area Below the Articles are for in-depth reviews and any questions you may have on each topic. You may post pictures here as well. Top Deck Staining Articles 2020 Staining A New Deck The Best Deck Stains Become a DSH Contributor? Wood Restoration Contributors

How to Stain Rough Sawn Wood
02/23/2020 by Deck Stain Help
You cannot apply another stain over it. You would have ...